Summary: A Boeing 757 piloted by Captain Eugene Tollefson and First Officer John J. Waller, was passing near Bovina, Texas. Captain Tollefson left his seat to look at a line of regularly flashing lights. As the lightning flashed behind the lights, it silhouetted something that to the observers appeared to be a large, dark, cigar shaped object between 300 and 500 feet in length.

"Cactus 564" was a routine America West flight that began in Tampa, Florida. The final leg of the flight was from Dallas/Forth Worth into Las Vegas, the ultimate destination.

On the night of May 25, 1995, Flight 564, a Boeing 757 piloted by Captain Eugene Tollefson and First Officer John J. Waller, was passing near Bovina, Texas, just across the state line from Clovis, New Mexico at about 9:25 MST.

There were thunderstorms to the northeast, and the lead flight attendant was watching the lightning flashes in the night sky.

This flight attendant was the first to notice a line of regularly flashing lights in the sky to the north and below the airliner. The First Officer then saw them as well, and they observed a horizontal row of eight strobe-like lights, flashing on and off in sequence from left to right.

The lights, which were as bright as aircraft landing lights, were at an altitude of between 30,000 and 35,000 feet, and were bright white with a tinge of blue.

Captain Tollefson left his seat to look, and he saw the left to right sequencing lights also. As the lightning flashed behind the lights, it silhouetted something that to the observers appeared to be a large, dark, cigar shaped object between 300 and 500 feet in length, depending on how far away it was.ufoevidence.org 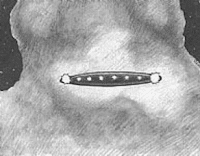 The B-757 continued its course as the lights began to fall behind it. A group of dark thunderclouds formed, and enabled the UFO to be seen as a cigar-shaped object as its lights illuminated the back drop of the thunderclouds.

Waller and his co-pilot estimated the object's length at 300-400 feet.

The object was not visible on FAA radar, but one of the controllers contacted the North American Air Defense Command, and was told that NORAD was tracking an unidentified object. But, this object later turned out to be a small plane with a non-functioning transponder.

NORAD Confirms UFO:
The next day, the controller made another check with NORAD, and he was told that they had indeed tracked another unknown target the night before that was at first stationary, then accelerated and stopped again very rapidly. These quick darts were estimated at somewhere between 1,000 and 1,400 mph.

Webb Investigates:
When reports of the incident began to be leaked, Webb began to investigate. In addition to interviewing the airliner's crew, he also obtained the tapes of the conversation between FAA air traffic controllers and their contacts during the sighting. He was able to make drawings of the UFO. He also filed Freedom of Information Act requests, and searched military installations to see if any activity that night could account for the sighting.

Conclusions: There was nothing that could explain the sighting of America West Flight 564, and until another explanation can be found for the unusual object, we must assume that a UFO was seen that night.

The case of America West 564 is a good example of a confirmed UFO by an experienced crew, with confirmation by radar.about.com 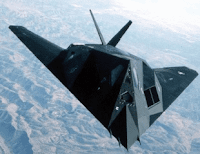 Soon afterwards, an F-117a Stealth Fighter, from Holloman AFB, was alerted to the report and the pilot radioed that he had seen something passing by his left side. Apparently this time, it was picked up on radar, as ground control confirmed this.

Silhouetted against flashes of lightning, HP 564 saw the UFO pass very close to their Aeroplane and described it as an ‘eerie sight’.

The craft then disappeared from view.

Albuquerque ATC contacted NORAD’s Western Headquarters at McChord AFB in Washington State. The lady at NORAD claimed that they had nothing in the area that she knew about. The Albuquerque controller said that it was a ‘definite UFO’ and was ‘right out of The X-Files’. Scribd.com Black-Box-Ufo-Secrets