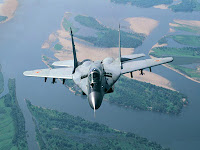 Statement by General Igor Maltsev, Chief of Air Defense Forces, concerning the incident on the Pereslavi-Zalesskiy Region on the night of March 21, 1990.

"I am not a specialist on UFOs and therefore I can only correlate the data and express my own supposition.

According to the evidence of these eyewitnesses, the UFO is a disk with a dark diameter from 100 to 200 meters. Two pulsating light were positioned on it's sides.

When the object flew in a horizontal plane, the line of lights was parallel to the horizon. During vertical movement it rotated and was perpendicular to the ground. Moreover, the object rotated around it's axis and performed an "S Turn" flight both in the horizontal and vertical planes. Next, the UFO hovered above the ground and then flew with a speed exceeding that of the modern jet fighter by 2 or 3 times.

All of the observers noticed that the flight speed was directly related to the flashing of the side lights: the more often they flashed, the faster the speed."