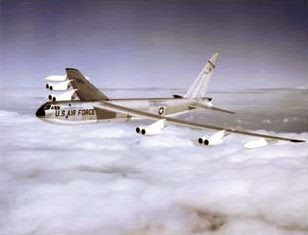 We are reminded of Blue Book case# 12548, in which a UFO was sighted on October 24th, 1968 at Minot Air Force Base, North Dakota. Airmen on the ground saw a brightly-lit object hovering above the ground.

A B52 was flying in the area and was diverted to investigate. The crew clearly saw a structured craft and they appear on camera to describe their experiences.

The co-pilot, an Air Force captain, is certain that what he saw was an alien spacecraft.

The navigator picked it up on his radar scope and we are shown photographs of the actual blip as it paced the aircraft. When it vanished from the scope, they turned the aircraft in an attempt to locate the UFO visually. They saw it hovering close to the ground. It was described as at least 200-feet in diameter, hundreds of feet long, glowing yellow, with a metallic cylinder that was attached.


The crew of the B52 and sixteen ground witnesses attested that they saw a UFO that night. Blue Book came to the astonishing conclusion that what they actually saw were nothing more than stars!