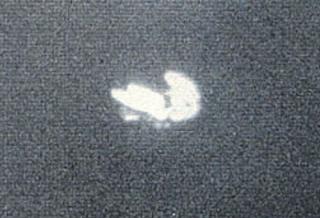 J. Allen Hynek, investigator and scientific advisor for the U.S. Air Force's "Project Blue Book" witnessed a ufo while flying as a passenger aboard an airliner and took a couple pictures of the unidentified object.

According to the story, "He suddenly noticed a white object at his altitude, seemingly flying at the same speed as the plane and made sure it wasn't a reflection and quickly snapped some pictures".

Dr. Hynek was able to get two pairs of stereoscopic photographs of the ufo but unfortunately the negatives seem to be misplaced or forever lost.

The pictures were included in Hyneks book "The UFO Experience" and other than asking the readers what the object might be , he didn't say very much about the sighting.