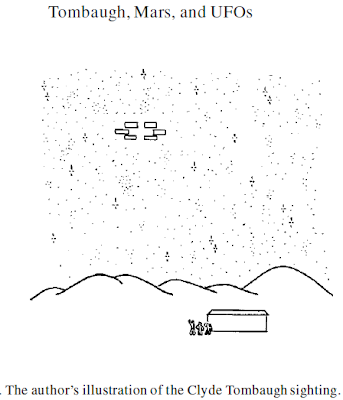 
"I saw the object about eleven o'clock one night in August 1949 from the back yard of my home in Las Cruz, New Mexico. i happened to be looking at zenith admiring the beautiful transparent sky of stars, when suddenly i spied a geometrical group of faint blueish-green rectangles of light similar to the "Lubbock Lights". My wife and her mother were sitting in the yard with me and they saw them also. The group moved south-southeasterly, the individual rectangles became fore-shortened, their space of formation smaller (at first about one degree across) and the intensity duller, fading from view at about 35 degrees above the horizon. Total time of visibility was about three seconds. I was to flabbergasted to count the number of rectangles of light, or to note some other features i wondered about later. there was no sound. i have done thousands of hours of sky night watching, but never saw a sight so strange as this. The rectangles of light were of low luminosity; had there been a full Moon in the sky, i am sure they would have not been visible."

"Tombaugh was probably the most eminent astronomer to have reported seeing unidentified flying objects and to support the extraterrestrial hypothesis[citation needed]. On August 20, 1949, Tombaugh saw several unidentified objects near Las Cruces, New Mexico. He described them as six to eight rectangular lights, stating: "I doubt that the phenomenon was any terrestrial reflection, because... nothing of the kind has ever appeared before or since... I was so unprepared for such a strange sight that I was really petrified with astonishment."