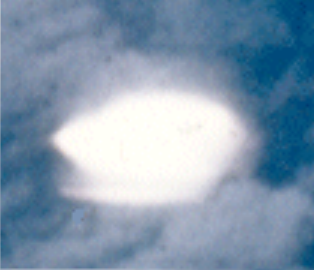 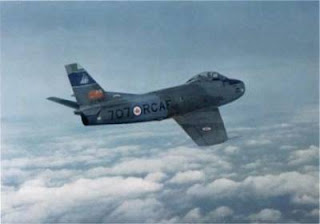 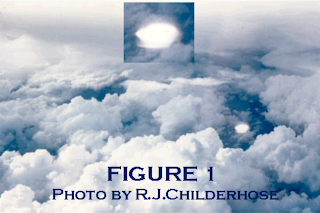 "1956-Canada-A Royal Canadian Air Force pilot while flying at an altitude of about 11 km saw and photographed a very bright, disc-like object that was remaining stationary near a thunderhead. An analysis of the photograph suggests that it would have been radiating in excess of a gigawatt of power within the spectral range of the film."

From a letter to Dr.James McDonald, June 12, 1968: “I don’t know whether I mentioned this to you but the photo of the bright object doesn’t represent quite what appeared to the naked eye. When I first saw the object it appeared as a very bright, clearly defined discoid, like a silver dollar lying on its side. The photo makes it look like a blob of light, the result of light intensity. It appeared much brighter than that (sic) of the sun which, of course was setting behind the clouds up ahead. What appears in the Kodachrome slide is a disappointment, really.”

Case #I occurred on August 27, 1956, near McCleod, Alberta, Canada. The witnesses were two Royal Canadian Air Force pilots who were flying in a formation of four F86 Sabre jet aircraft. The planes were flying due west over the Canadian Rockies at 36,000 feet about one hour before sunset.

One of the pilots saw a "bright light which was sharply defined and disk-shaped," that resembled "a shiny silver dollar sitting horizontal," situated below the planes but above a thick layer of clouds. It appeared to be considerably brighter than sunlight reflecting off the clouds. The duration of the sighting was estimated to be between 45 seconds and 3 minutes.

The first pilot to notice the object reported the observation to the flight leader and then took a photograph on a Kodachrome color slide. This case and this photograph were subsequently analyzed by Dr. Bruce Maccabee (Maccabee, 1996). Maccabee has presented an argument against the propositions that the phenomenon is due either to reflection of sunlight by the clouds or to lightning. From the available data, Maccabee estimates the luminosity of the object (the power output within the spectral range of the film) to be many megawatts. 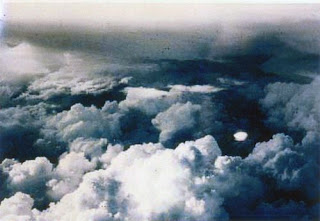